A whole new world – That’s what you are thinking when you step out on to Kreshchatyk (Крещатик) Street. It doesn’t matter if you came by bus, metro or taxi.. you are immersed in a world that is probably vastly different than what you are used to … and you are right. It is a whole new world.  But it is also strangely familiar. 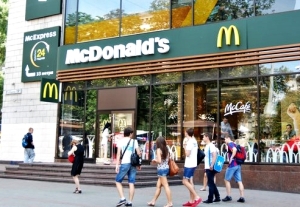 The street and plaza in front of Kreshchatyk metro station’s doors are full of people.. There are vendors selling their wares, people handing out flyers for almost everything imaginable.. people waiting to put a dove on your shoulders and snap a picture (which they will immediately try and sell you)… There are street musicians playing anything from guitars to bagpipes…. There are human statues..  There are people eating, drinking, laughing, dancing,  or just going about their lives.  It can seem a bit overwhelming but you’ll be fine. So grab your camera and let’s take a walk.

Even though it is only 1.2 km long, Kreshchatyk, is the main street in Kiev. It begins at European Square on the northeast and ends at Besserabtka Square. Nestled in-between is Independence Square, commonly called the Maidan.

Maidan Nezalezhnosti, literally Independence Square, is the next stop along Kreshchatyk Street.  This is the central square in Kiev and, most commonly called “the Maidan” .

A monument to the Archangel Michael (spiritual protector of Kiev) can be seen among the fountains on one side of the street.

The large glass domes are skylights to the underground mall Globus. The Cossak Mamy , the goddess Berehynia and  Kyi, Schek, Khory and their sister Lybid, the legendary founders of ancient Kiev are on the other.

The plaza here is also used for outdoor concerts, political gatherings and protests , and one of the largest New Year’s Eve  parties I have ever attended.

Kreshchatyk Street is also blocked to traffic starting here, every weekend.  I have been told several stories as to why this is done but my favorite is this:

During WWII Kreshchatyk Street is where the women waited for and met their families when they returned from the “front lines”. It was a place to be reunited with loved ones coming home from war. I do not know if that is a true story but this section of the street is always filled with families and couples.

Kreshchatyk Street continues southwest past the main post office and the administrative buildings for the city, the city council building and the central department store until you arrive at Besserabska Square.

Besserabska Square is the home of the Besserabska Rinok. It is a large enclosed market where you can find fresh fruit, vegetables, meat, dried fish and even caviar. It is where farmers from outlying villages came to sell their produce. Kiev’s main monument to Vladimir Lenin is located across the street at the beginning of Taras Shevchenko Boulevard.

Besserabska Square is also where you can find the entrances to the underground shopping center – Metrograd.

And the journey continues ….

The flight of tomorrow

Backpacker, solo traveller....you are in a right place!!

Documenting life as how I see it

“It takes a lot of imagination to be a good photographer."

The ultimate guide for independent travellers seeking inspiration, advice and adventures beyond their wildest dreams

and wake me when we're in love

"Not all those who wander are Lost"

of books and art