St. Michaels’ Golden Domed Cathedral and Mykhailivska Square ..  A beautiful cathedral just a short walk from the Maidan (Independence Square) and a great stop on the way to Andrew’s Descent (Andriyivsky Uzviz in Ukrainian)

From Sofiyska Square, you will see another cathedral to the east.. St. Michael’s Golden Domed Monastery which sits on Mykhailivska Square.

The original cathedral was built in the middle ages and dedicated to the Archangel Michael. It was demolished in the 1930’s after falling into disrepair but was reconstructed and reopened after Ukrainian independence in the late 90’s. While it is not an exact reconstruction of the original, St. Michaels is a beautiful sight to see.

Also on the square, is a monument to Olga of Kiev. Her husband, Igor of Kiev, was killed and she ruled as regent for her son Svyatoslav. If you read into the history of her rule, you will see she was ruthless in her protection of Kiev. 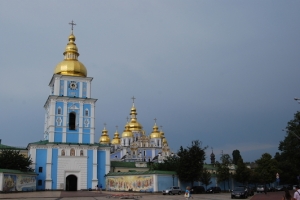 Post, news, diary... All the world around me, ALL THE WORDS AROUND YOU

Backpacker, solo traveller....you are in a right place!!

Documenting life as how I see it

“It takes a lot of imagination to be a good photographer."

The ultimate guide for independent travellers seeking inspiration, advice and adventures beyond their wildest dreams

and wake me when we're in love

"Not all those who wander are Lost"